A head lice outbreak is awful, and so is going through a breakup. There is nobody in this world who loves either. In Fact, dealing with head lice can often evoke similar emotions as dealing with a breakup. Most mothers go through phases when finding out their children have head lice and most people go through some not-so-fun phases after a breakup. 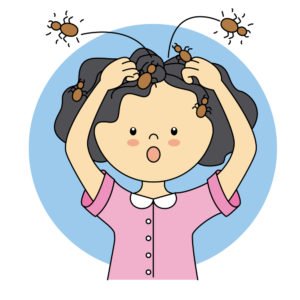 Most parents fall into an all-consuming state of panic when they realize their child has head lice. Don’t worry, this is very common. It’s kind of like when you break up with someone and then think to yourself “what the heck did I just do?” immediately afterward. We naturally fear the unknown, so when a parent knows absolutely nothing about head lice, it can be scary for them. When you break up with someone, not knowing what life will be like without them can strike up some fear as well. The reason most parents panic is because they think it might be very harmful to their child or they think it is their fault. Those are both untrue. If you discover that your child has head lice, remember not to panic. Panicking will only make it worse.
2.

The Sad and Depressed Stage

I think it’s pretty clear that most people go through a dramatically depressing stage after a breakup and this can happen during a head lice crisis as well. You might find yourself asking “WHY?! Why me? Why My child?” I’ll be the first to admit that moms can be a little theatrical and dramatic sometimes but it gives us character! Just try not to freak out in front of your children, it’s important to make it seem like no big deal so they won’t be scared.

The anger stage is like the sad and depressed stage but with more fumes and less tears. This is when you start telling yourself, “This is so stupid. I can’t believe I have to deal with this disgusting stuff, when do I ever get a break?” During a breakup, it would sound more like “I gave you my heart and you stomped on it, you heartless jerk!” Anyways, it’s ok to be angry about lice, nobody enjoys it. This is the point in the breakup when you would send some nasty text messages and regret it the next day.

The Dealing with it Stage

It comes to a certain point in both a breakup and a head lice debacle where you just have to pull yourself together and deal with it. “Alright, I got this!!!!,” you’d say to yourself. This is about the time most moms call Lice Clinics of America- College Station and we take it from there. At this point you got all the dramatic emotions out of your system and you’re ready to talk options and just get rid of it.

The Moving On Stage

This is the best stage of all. You’ve conquered what you once thought was unconquerable and it feels pretty good. You now know that this trial happened to make you a stronger person and a stronger mother. You’ll now definitely recommend your friends to Lice Clinics of America- College Station. You are so happy that your child is lice-free and that you are sane again.

Just know that whether you are dealing with head lice or a breakup, you are not alone.